The State Library of NSW and Magic Inc. invite you to a very special performance in celebration of our magical exhibition How’s Tricks?

Join us at the Library for a night of magic and illusion that will showcase some of Australia’s most innovative magic makers live on stage together for one night only. With a strong nod to the golden age of magic and an eye towards the future, the evening magical soiree sits somewhere between a 20th century parlour show and a modern theatrical experience.

Enjoy pre-show drinks and be entertained with some interactive roving magic — then settle in for the performance and get ready to be wowed by a diverse team of talent.

How’s Tricks? live on stage is the very embodiment of the rich and long history of Australia’s fascination with magic and magicians.

How’s Tricks? Magic in the Golden Age exhibition at the State Library of NSW is open until Sunday 27 March.

Adam Mada (MC and host), known as ‘Mr Magic’, is the magic and illusions coach for the Australian production of the global smash hit Harry Potter and The Cursed Child; the magic and illusion consultant/ coach for NIDA; as well as the magic/illusion designer for the highly anticipated stage adaptation of Mem Fox’s classic Possum Magic and the ultra-modern 2022 production of Blithe Spirit by Sydney Theatre Company. Adam’s performances are in demand throughout the world, from the Sydney Opera House to The Royal Bombay Yacht Club, entertaining audiences for over 20 years.

Erica Vanlee is a talented performer across multiple mediums including television, stage and print. Her passion for the arts has taken her around the world and she now splits her time between Sydney and Las Vegas. Television credits include: Masters of Illusion, Raising Hope, Droned, Wrong on Every Level, and she worked side by side with Elijah Wood in the film The Trust.

Erica has toured with Criss Angel’s ‘The Supernaturalists’ and ‘Mindfreak Live’; CW network’s ‘Masters of Illusion’, ‘The Pendragons’ and had long-running hits in Las Vegas with ‘Comedy Central’s: The Amazing Johnathan Show’ and in Spiegelworld’s ‘Opium’. In 2022 she performed her new show at the Adelaide Fringe Festival.

Timothy Hyde & The Amazing Lynda have experienced a lifetime of magic together, performing professionally around the world since the early 1980s. They performed at Australia’s Wonderland; on luxury cruise ships like the QE2 and the Crystal Symphony; and Casino shows.

They have performed in South Africa, Cambodia, USA, New Zealand, New Caledonia, Hong Kong, Thailand and seemingly every city in Australia, including shows in prisons, arts festivals, and corporate events. They toured as an opening act for international performers such as James Taylor, KC & The Sunshine Band, Whoopie Goldberg and rock and roll legend Johnnie Ray.

Helen Coghlan started as stage assistant to her father, Arthur Coghlan, in his Gold Coast magic and illusion show, The Magic Castle, and quickly became a top entertainer in her own right. She has won Australia’s Junior Magician of the Year award, Queensland Variety Wallace Award and several awards from the Australian Convention of Magicians. Helen has appeared on many national and international TV shows including four appearances on hit show Penn & Teller: Fool Us between 2018 and 2021. Helen has performed at Hollywood’s prestigious Magic Castle, Rio Casino Las Vegas, and at the Sydney Opera House. Helen has also followed in her father’s footsteps to become one of Australia’s leading escapologists. She created a lot of media attention when she became the first woman in the world to perform Houdini’s famous Water Torture Escape, which was televised.

Ash Hodgkinson aka ‘Ash Magic’ fell in love with magic as a young boy with ADHD and anxiety. He has been performing live for audiences since he was 11 years old. Awards for his live shows include Sydney Fringe Festival — Best Kids Entertainment, Overall winner Short and Sweet Comedy and Magic Festival, Australian Junior Magic Champion, and New Zealand Magic Champion. Ash’s @ashmagic channel connects with a global audience providing magic, behind the scenes tutorials, comedy skits to over 10 million followers across TikTok (8.8m), YouTube (1.9m) and Instagram (257k). His book Real Magic — Tips, Tricks, TikTok and Totally Good Vibes was published by Penguin Random House, October 2021.

Harry Milas is a Sydney-based magician, specialising in ‘close-up’ performance. His signature close-up show has received awards and five-star reviews at multiple festivals. He has appeared on the Today Show, ABC and The Disney Channel, and has been lucky enough to study with some of the world’s leading thinkers in the magic community. 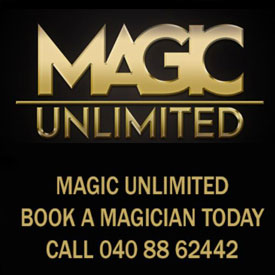